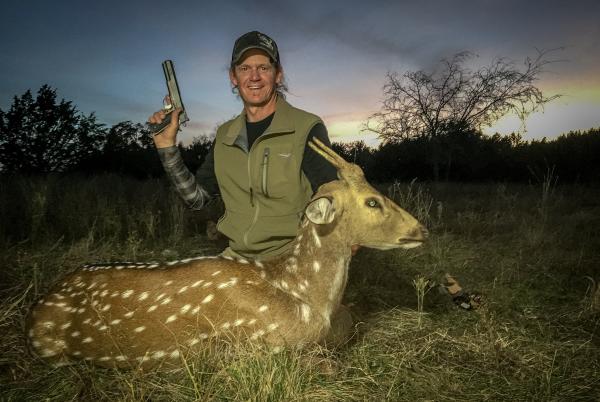 BV: What do you think?

RAZOR DOBBS: It’s exactly what I expected from Dan Wesson. I mean, the Bruin is tight as funeral drum and runs like mad.

RAZOR DOBBS: It’s very sweet and very accurate for sure but I prefer their five-inch 1911’s. I get plenty of accuracy out of my five-inch Dan Wesson Razorback and Silverback so the extra inch, even though it makes a longer sight radius, is inconsequential to me. Now, for people who love a six-inch barrel, the Bruin the best. Some get better accuracy from the longer sight radius and some like the fact that the longer barrel produces higher velocity. I get it. I know it to be true. I love the Bruin for all of these reasons. But for me, I’ve carried and hunted with five-inch Dan Wesson 1911’s for so long that anything longer seems…well…too long. But that me today. The six-inch Bruin is selling like crazy. People love it.

RAZOR DOBBS: I do like the .45 ACP caliber for what it is and what it was designed for but my all around, do all, fix any problem caliber is the 10mm auto. It’s blows the .45ACP out of the room. 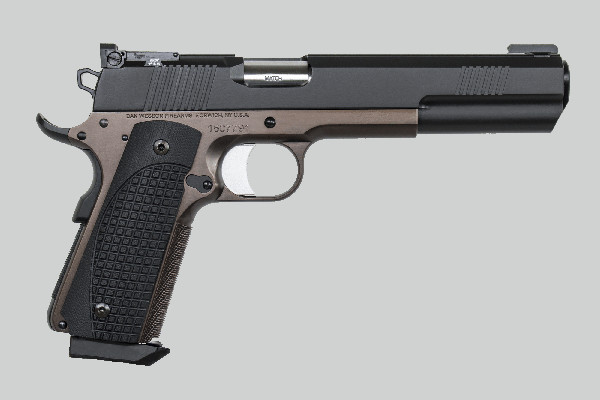 BV: Have you hunted with the Dan Wesson Bruin, yet.

RAZOR DOBBS: Yep. I hunted with the Bruin last season. It was cool. I shot an axis spike with it from about 25 or 30 yards. PING! When you put that Bruin in your hands and line up the sights it feels just as sweet as any other Dan Wesson. It feels perfectly natural. It holds perfect and the trigger is fantastic. I shoot just as good with the Bruin as I do my five-inch Dan Wesson’s, so it’s hard to say which is more accurate. I’m sure, if you start shooting out past 50 yards the Bruin becomes more accurate than a five-inch.

BV: Tell me about the Bruin.

RAZOR DOBBS: The Dan Wesson Bruin was designed to be a 100% hunting 1911 pistol. As I said before, they gave it a long-slide, six-inch barrel to gain a longer sight radius and to get better velocity out of the ammo. It comes stock with fully adjustable tritium sights, with the front sight a tritium/fiber optic combo. A sight like that makes all the difference in the world. The Bruin comes in a two-tone black/bronze or in a black Duty finish with red/black G10 grips. Great looking 1911.

BV: If the longer barrel in the Dan Wesson Bruin produces better velocity, why didn’t you use it on your Cape Buffalo hunt last year?

RAZOR DOBBS: It had nothing to do with the difference between a five-inch and 6-inch barrel, longer sight radius or better velocity. It had everything to do with what I like, and what I’m use to. Back then, I didn’t have much range or hunting time with the Bruin. Also, I’m so use to the five-inch Dan Wesson Razorback - I’ve killed truck loads of animals with it - It’s an extension of my brain. My confidence with that gun is beyond. Plus, I did all my testing with that five-inch Razorback so I knew it had the proper velocity to kill a Cape buffalo.

BV: Do you think you will take the six-inch Bruin to Africa on your next safari?

BV: Going back to the Bruin in .45 ACP, if the .45 ACP is not really a hunting caliber, why did Dan Wesson give the Bruin the .45ACP option?

RAZOR DOBBS: Don’t get me wrong. You can hunt with the .45 ACP for sure, but your shot distances will have to be a lot closer as compared to the 10mm. You really have to know the ballistic limitations of the .45 ACP before you go for it. Self defense and hunting are not the same. Now get this. DoubleTap Ammunition has an incredible hunting round for the .45 ACP. It’s called the 450 SMC. It’s the best penetrator for the .45 ACP. It’s a mutha. You can only shoot the 450 SMC in .45 ACP pistols that are made to handle +P ammo and have a +P recoil spring. Now, check this out: Shooting a 230 grain DoubleTap 450 SMC Bonded Defense TMJHP you will get 1130 feet per second. Out of a six-inch .45 ACP loaded with 255 grain DoubleTap 450 SMC SWC Hard Cast you will reach 1030 feet-per second and over 600 ft.lbs. of energy. It’s not as powerful as the 10mm auto, but it’s damn close. 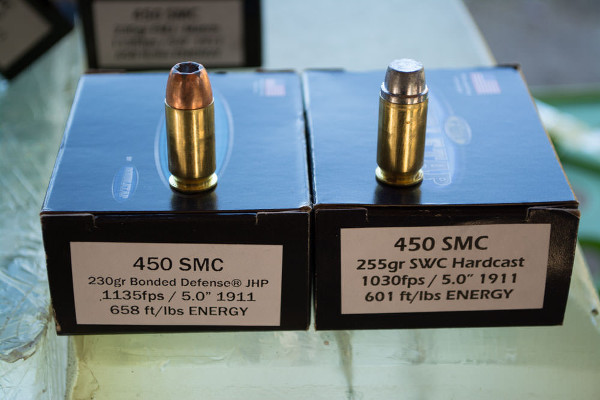 RAZOR DOBBS: Most people haven’t but DoubleTap Ammunition has mastered it and they are selling lots of it.

BV: So, if someone wants to start hunting with the 10mm auto which pistol should they buy?

RAZOR DOBBS: For starters, I can’t stress enough in getting a Dan Wesson 1911. There is just no comparison. Frankly, a Dan Wesson is a custom 1911 that is just labeled a production gun. It’s all custom. They are crafted to perfection. For the money, you can’t buy a better, more reliable, more accurate 1911 than a Dan Wesson. That’s just the facts.

RAZOR DOBBS: Take your pick from the Razorback, Silverback and Bruin. It doesn’t matter. They will all get your dinner and they will blow the balls off any boar at 40 yards.