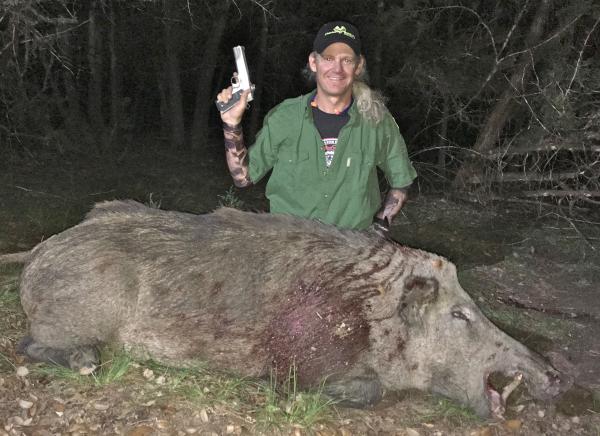 BV: You have often said that your favorite animal to hunt is hogs?

RAZOR DOBBS: That’s true. I love pork. But most of that’s because growing up I didn’t get to hunt big whitetail bucks or Cape buffalo or the like. I had no restrictions on hogs and I hunted them like mad. Way too much fun.

BV: How many hogs do you think you have killed?

RAZOR DOBBS: I would imagine. I mean. I grew up hunting them. In the summers, working at my grandparents ranch, I hunted them every day after work and even into the night.

RAZOR DOBBS: Oh ya. We would spotlight them or I would use a KillLight. All legal. All fun.

RAZOR DOBBS: You gotta understand. The hog population was jamming. They're insurgents. We trapped them. Hunted them with dogs. Bows. Arrows. Rifles. .357 Magnums and 10mm’s.

BV: What bullet would you use in the 10mm automatic?

RAZOR DOBBS: In the early days I used all sorts of ammo and bullets. Hollow points mostly.

BV: Did you every use Hard Cast solids?

RAZOR DOBBS: No. It’s too much. Those bullets just punch a hole through a hog. You can kill a hog with a Hard Cast for sure, but your better off with a good jhp (jacketed hollow point). I mean the 155 grain TACXP I use from DoubleTap is just death. I’ve killed everything with it from hogs, deer, warthog, red lechwe and nilgai antelope with it. Just a screaming beast.

BV: When did you switch to DoubleTap Ammunition?

RAZOR DOBBS: About 10 years ago a cop friend, a real 10mm fan, gave me some DoubleTap. I had never heard of it. I checked out the velocities and it was the real McCoy. Real, full power, 10mm.

BV: DoubleTap ever since?

RAZOR DOBBS: 100% DoubleTap. I got really into that ammo. I saw all the different bullets they load and was blown away. I think DoubleTap is the first, and only company, that really understands the 10mm. Most brands just load whatever bullets into the 10mm and they believe the heavier the better. It seems there is little research and obviously no hunting experience with the 10mm. They never get in deep with the unique 10mm and see what it can do with different loads.

BV: What do the outdoor writers say?

RAZOR DOBBS: Well, it’s like they start off with the same old talk about the 10mm being so hard to shoot because of the recoil. Too much recoil? Compared to what a 9mm or .38? If you can shoot a .45 ACP then you can for sure handle a 10. They make the 10mm sound like a .44 Mag or a 454. It’s really funny. I don’t think most of these guys have ever even shot a 10. And 99% of these guys have never killed a deer, hog or anything with it and they say you have to shoot nothing less than a 200 grain solid to hunt deer. It’s ridiculous.

BV: What would you not hunt with a 10mm auto?

RAZOR DOBBS: Absolutely. Both Cape buffalo dead with my 10mm. Both heartshots.

BV: What is your most memorable hog hunt with the 10mm?

RAZOR DOBBS: It has to be the time I was attacked by a huge boar and I killed him with my 10mm. I’ve written two articles on the attack and the latest one will be published is Texas Fish & Game.

RAZOR DOBBS: You’ll have to read the article but in short I was bowhunting with a friend and a wounded boar decided to eat me. He charged in the blink of eye and I drew my 10mm and started shooting. He hit me and threw me into all of this cactus. I kept shooting and I finally put one in his brain right at the last second and he fell dead on my feet. Absolutely nuts!

BV: Were you hurt?

RAZOR DOBBS: I had a million cactus spines stuck in my back, legs and head but the only damage the hog did to me was tear my pants and shave the skill off my shin. I was lucky. It scared the hell out of me.

BV: That an incredible story.

RAZOR DOBBS: It is. You gotta read the article about it in Texas Fish & Game. It’s a killer.