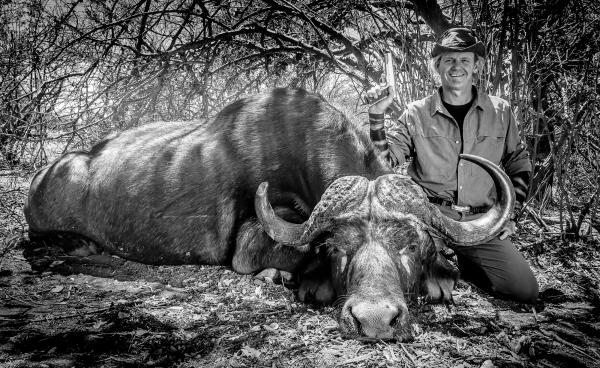 BV: It’s no secret that you killed, not just one but two, Cape buffalo with your 10mm automatic pistol in Africa.

RAZOR DOBBS: That’s right. Hunting and killing those two Cape buffalo with my 10mm are my two biggest feats. Not just huge for me but huge for the 10mm auto.

BV: I never thought a 10mm auto was powerful enough to kill a Cape buffalo?

RAZOR DOBBS: No one else did either. But Mike McNett from DoubleTap Ammunition and I knew it was. We did the test. We did our home work. We did the field work. We knew the 10mm auto was Cape buffalo proof. I laughed and still laugh at the “experts” who say the 10mm is not enough. I think it’s great, especially when the critics see me with a huge smile, a 10mm in my hand and huge, dead Cape buffalo at my feet.

BV: Why doesn’t the majority of people know the power of the 10mm auto?

RAZOR DOBBS: Limited vision I suspect. Flat Earth’ers. Only a few people on this planet really know what a 10mm auto is capable of. The most of the gun manufactures, the outdoor writers, the “experts” and the ammunition manufactures, except for DoubleTap Ammunition, don’t have freaking clue about the real power of the 10mm auto. They’ve put the caliber to a certain, limited, test and then slammed the door. Then, I come around, this young kid back in the ’90’s, and I start doing what they said was not possible. Now, with almost 25 years under my belt hunting Cape buffalo, whitetails, hogs, elk, nilgai, sheep, fallow, axis, zebra, waterbuck, warthog, red lechwe, spring buck,wildebeest, gemsbok, etc., etc., - I’ve witnessed first hand what the 10mm auto pistol is capable of. I’ve experienced pulling the trigger on all those magnificent beast and seeing the clean kill results. So. Hell, yes. The 10mm auto pistol, loaded with DoubleTap Ammunition’s 200 grain HardCast going 1300 feet-per-second, kills Cape buffalo dead as disco.

BV: What was the situation on your first Cape buffalo kill?

RAZOR DOBBS: It was tough just getting close to them. I had originally set a maximum shooting distance at 25 yards to maximize penetration. But after five days or so of not getting that close I knew I would have to shoot further.

RAZOR DOBBS: For sure. Where I hunted these buffalo there were lots of lions and the lions were hunting and killing the hell out of the buffalo. It was during a big, nasty drought and the buffalo were getting hammered by the big cats. The buffalo were on high alert. We searched for lone dugga boys the whole time but we found nothing. We were stuck hunting the herds. That’s tough when you gotta get 10mm pistol close. Hunting the herds…it’s like you have hundreds of buffalo eyes searching for lion or any predator with a ponytail. It’s almost impossible to get close enough for a 10mm shot. We had lots of busted stalks but we kept on working it.

BV: Did you ever think, “This is not going to work.”

RAZOR DOBBS: No. It had to work. It’s a probability game. You just keep hunting until you get a break. You can’t get freaked out and give up. Don’t get me wrong. It was frustrating as hell sometimes. I mean, you’re flanking a herd of buffalo with about 100 yards cushion. All is cool. They know you are there, but they don’t panic and run. They just keep moving, walking and watching you as if you are lion at a safe distance. You’re just easily shadowing them. All is cool. You look for an angle in the cover to close the cushion distance to about 80 yards. You just keep walking, easily, non threatening. You start your move and then, BOOM! The buffalo freak and stampede like hell into bush and vanish.

BV: How did you ever get a shot?

RAZOR DOBBS: Like I said, you just keep hunting and working it. Sometimes you could see where the herd was heading and you can see that they are going to have to cross a narrow river bed or something so you go way around, down wind and set up an ambush. This is a great way to kill a buffalo but it can go very wrong as well. For instance, you set up in a perfect ambush point only to have the buffalo cross behind you down wind. Busted. Or, the herd crosses in front of you perfectly but you don’t see a shooter bull. It’s crazy. A lot of work and mostly you end up eating buffalo dust.

BV: So how did you kill the first Cape buffalo?

RAZOR DOBBS: Finally. After about five days of hunting and getting my ass kicked, I got a break. We were flanking a big herd of buffalo for about half a mile or so through some real thick nasty bush. It’s great cover but the thorns are constantly kicking your ass. Any way, we are flanking this herd of Cape buffalo and the cover starts to open up. I thought the buffalo were going to keep heading straight but they started to angle to the north. I went to the last bush I had for cover and the buffalo stopped 35 to 40 yards away. Then, a big, hard bossed beast of a buffalo stepped out, perfectly broadside. It was as perfect as it was going to get. From my knees, I aimed right for his heart and belted him perfectly in the heart. I could see the hit. Oh, my God! Thank you! The buffalo twisted and turned behind some cover. I ran to the right about ten yards where I could see him. He was broadside again and I quickly aimed and shot him right in the heart a second time. He and the whole herd busted out in full till stampede. I watched the bull run and then stop and fall. The first shot through the heart killed him but he didn’t know it yet.

RAZOR DOBBS: Dead on arrival. Dead as disco. He was dead within seconds. I couldn’t believe it was so fast. I have shot numerous Cape buffalo with the rifle and I have never seen one die that fast. They are tough as hell.

BV: It must have been a huge celebration.

RAZOR DOBBS: It was humbling. I was so grateful he gave me the shot and that I hit him in the heart. I was grateful he went down so quickly. It was a special moment. I’ll never forget it. 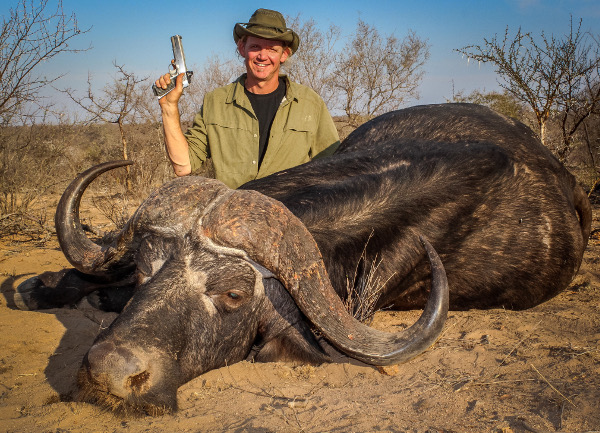 BV: Who was the PH (professional hunter/guide)?

BV: What was their reaction?

RAZOR DOBBS: The same as mine. Humbled. It was a moment of awe. But then reality set in and the excitement started. We had done it. The first true Cape buffalo kill with a 10mm auto pistol. Totally clean. We said we could do it and we did.

BV: What was it like walking up to the dead buffalo?

RAZOR DOBBS: Oh, my God. Walking up to him was the ultimate. I mean, I was cocked and locked ready for the beast to jump up and charge or run but that didn’t happen. He was dead. I hugged Tonie. I hugged Chris. I hugged the Cape buffalo.

BV: How was the shot placement?

RAZOR DOBBS: Both 10mm shots on the buffalo where about six inches apart and right in the heart. When we skinned the buffalo, we found one of the DoubleTap hard cast bullets about four inches under the skin on the off shoulder. That’s killer penetration from a 35 yard shot. There is a picture of me holding the buffalo heart with two giant 10mm holes in it. It’s my favorite picture.

BV: So how many days later was it when you killed the second Cape buffalo with your 10mm auto?

RAZOR DOBBS: I believe it was about five days later. Time was running short.

BV: Was the second buffalo harder than the first?

RAZOR DOBBS: About the same. We were stuck hunting herds so we had to deal with that. Finding a mature, hard bossed buffalo in a herd and then getting in range of him with a clear shot is a bitch.

BV: How did you kill the second buffalo?

RAZOR DOBBS: The same tactics that we did the first. I tried to ambush them tons of time and in the mean time, I just kept flanking them. Finally, while I was flanking them there was a huge hell hole of jess that you could not see through. I used this cover to move ahead and set up just ahead of them. It worked perfectly and the Cape buffalo strolled by in the open with a big old bruiser bull in the front. He spotted me, and jogged a small fish hook pattern and turned and looked at me. I had no shot at that angle but he soon stepped back toward from where he came opening him up broadside. That was all I needed. I shot him and I saw the bullet hit perfectly in the shoulder, right in the heart. He bucked and moved and I shot him again right in the shoulder. It was wonderful.

RAZOR DOBBS: He ran into the bush about 80 yards. I heard crashing and then nothing. Tonie, Chris and Ann Marie came up to me and we waited for a while then followed him up. We spotted him piled up just inside the bush. He only made it 80 yards at the most. Amazing!

BV: How did it feel to have killed two Cape buffalo with a 10mm auto pistol?

RAZOR DOBBS: It was incredible. I new the gun could do it. The only issue was to get close enough and have the right shot. To get two Cape buffalo in 14 days with the 10mm auto was a big feat but we did it. I was so proud of everyone. We just kept at it.

BV: How was the bullet penetration on the second Cape buffalo?

RAZOR DOBBS: Perfect. I mean perfect. I couldn’t ask for better penetration on a Cape buffalo. When I looked to see if the bullet passed through I saw this knot under the skin on the off shoulder. I knew it was the bullet. I got out my Outdoor Edge knife and made a slit in the skin and pushed the bullet out. The DoubleTap 200 grain Hard Cast blasted right through the shoulder, through the heart and stopped under the skin on the off shoulder! And that shot was at 38 yards! It was perfect! You could reload that bullet if you needed to. There is no doubt in my mind that the 10mm auto, loaded with DoubleTap 200 grain HardCast bullets can kill Cape buffalo cleanly. Just killer.

BV: Do you have future plans to go back to Africa and hunt Cape buffalo with the 10mm auto pistol again?