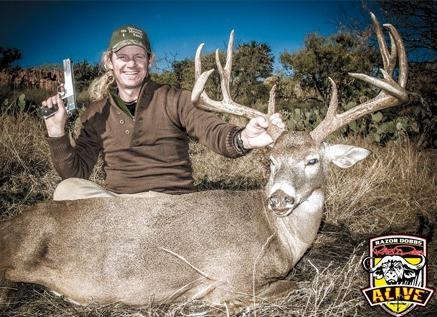 Thrilled to have two great guests join us this weekend! We start things off by discussing an interesting phenomenon in outdoor television with our good friend Razor Dobbs of ‘Razor Dobb’s Alive’. So many hunting shows and the networks they air on seem afraid to show the most important aspect of hunting- how we turn it into food. From the kill shot, to blood trails and especially the downed animal…almost without fail the video camera shuts off and a bottle of Windex is pulled out to clean the animal up. No bullet or broadhead hole, no blood. Meanwhile you can flip it on other major networks such as Discovery, Travel Channel etc and they show the entire process with as much blood as they can. Why is it that the hunting community seems to fear showing the way we really live our lives? We break it down with Razor.

Next up we switch gears and talk big game handgun hunting with Razor who has long been a proponent of hunting with an open sites 10mm pistol. From deer, to hogs, African species and even elk, Razor has tumped over some big animals with his 10mm. So what is the key? We talk bullets and ballistics, shot placement and shot distance with one of the sports biggest advocates. Be sure to check out Razor Dobbs Alive airing on Sportsman’s Channel coming up in July 2015! Sunday nights 9:30 PM Central.

Then we are joined by Captain Dave Carraro of the FV-Tuna.com of the hit show ‘Wicked Tuna’ on Nat Geo Channel. Now in it’s 4th season, Wicked Tuna has become Nat Geo’s highest rated show ever. Not bad for a bunch of bluefin tuna boat captains! Anyway, Dave talks about the bluefin tuna fishery in New England and what it takes to be the best of the best. His boat has had the highest earnings in two of the first three seasons and with one single fish bringing in as much as $8,000 it’s clear why the competition is fierce.

Dave then breaks down the gear required to take on a 500-1000 lb bluefin. What is the longest he’s ever fought a tuna? What about the longest the FV-Tuna.com has taken on a fish only to have it break the line or throw the hook? Lastly, you might be surprised to find out about Dave’s other full time gig…I promise it garners a bunch of funny looks at the airport.