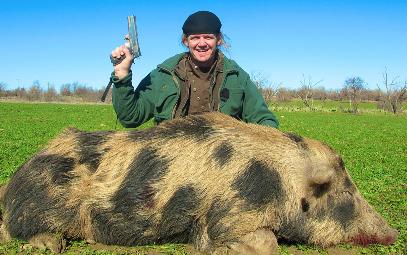 What an action packed show this week! We start things off by checking in with a fellow Texan who is making his way in the outdoor industry, and he is doing it on his own terms. Razor Dobbs of the hit show on Outdoor Channel ‘Razor Dobbs Alive’ stops by to discuss a myriad of hunting related topics. We get into Texas low fence exotics, whitetails, Africa, hog and much more!

Razor even breaks down the wild boar charge that he ultimately thought would claim his life. Also, if the notion of hunting big game with nothing but a pistol intrigues you then you won’t want to miss this conversation. Razor with a nice Texas spotted hog take with his 10mm pistol.

Next we hear the tale of one of those surreal outdoor stories when Washington elk hunter Rod Noah joins the show. Rod is an average fella who happens to be a passionate bow hunter- much like you and me. However in late September of this year, Rod was calling elk with a buddy when 2 male cougars suddenly came into the call. With a mountain lion tag in his pocket, Rod instinctively rose and took aim at one of the big cats.

The broadside shot connected and dropped the big kitty. Upon further inspection however, Rod and his hunting buddy found that the arrow had sailed thru cat #1 and into the chest of cat #2 – killing him as well! The odds of killing one mountain lion with archery equipment are astronomical but to kill two with one arrow is a hunting story for the ages. So we are thrilled to have Rod join the show to recount that experience in detail. Rod with both of his cougars from a Washington state September elk hunt. 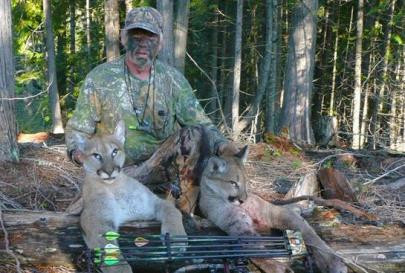 We then round out the broadcast by checking in with Lone Star Ag Credit’s Mike Shelley. As hunters, anglers and outdoorsmen and women we all would love to have our own piece of recreational outdoor property at some point in our lives. Whether for whitetails or bass fishing, being able to manage your own place on your own terms is the ultimate goal.

Sadly, land is the one thing that they can never make more of, so acquiring land has it’s hiccups. That being said, it’s not as difficult as some might think. Mike discusses land purchases vs residential purchases. We also get into what Farm Credit is like compared to other financial institutions. If you are interested in your own place you won’t want to miss it! 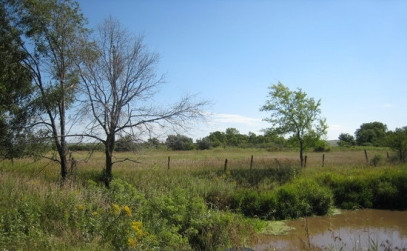