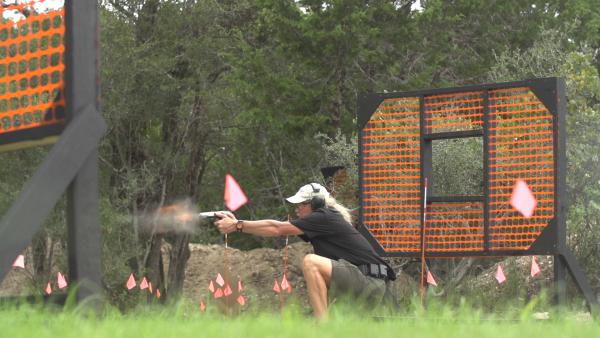 We interviewed Razor Dobbs about his personal handgun and SBR shooting range at his BladeLands ranch in Texas.

BV: Tell me about your new shooting range at your BladeLands ranch?

RAZOR DOBBS: It’s killer! When we first bought the ranch I dug out a caliche pit and built up a berm so I could hang some targets and practice. That in turn led me to get some steel targets like a pie plate rack, two hostage targets, dueling tree, etc. It was great for shooting my handguns but the layout was pretty rough. The nice thing about it was the location. It’s only about 100 yards from my house.

BV: Then you rebuilt it?

RAZOR DOBBS: Yes. I totally rebuilt the whole range. After a few years of shooting it up down there I decided to make some changes. I wanted something totally fun and out-of-the-box. I had just competed in my first USPSA shooting competition in Utah and I came back with a new plan. I wanted to transform my range into the real McCoy but better. I wanted barricades, shooting lanes, obstacles, walls, tons more targets, more room, seating, tables, chairs, you name it. I also wanted it to look great and be really safe.

RAZOR DOBBS: I’m allergic to country clubs. I just wanted a great place for me, my wife and friends to shoot. I also wanted a place to train and practice. I’m hooked on the USPSA stuff.

BV: What did the range make-over entail?

RAZOR DOBBS: First off, I got some heavy equipment down there and we made the original berm wider and twice as high. Then we added four more berms on the side and another berm beyond the main berm to the left. The course then dog-legs to another berm. We excavated one side of the range out to widen the whole place and we set gigantic boulders to form a retaining wall. Next to that retaining wall is the chairs and tables that is covered by a tented roof. We then ran a water line through the range so we could water it. We had two skid steers, an excavator, trencher and a dump truck all dancing for over two weeks.

BV: What kind of ground cover did you use?

RAZOR DOBBS: We hauled in tons of good dirt we got from the ranch and spread it out with different grades for water run-off. We then carpet-bombed it with grass seed. The cool thing was that right after we spread the seed we got about two days of rain. It was perfect and the grass shot up. The whole place looks great. It doesn’t look like a typical range. It’s green and it’s cut into the side of a hill bordered by trees. It’s a shooting oasis in the bush.

BV: Did you get barricades and walls?

RAZOR DOBBS: For sure. My dad and I made a bunch killer walls, 8 feet by 8 feet or so. We built them with treated lumber so they would not rot and we painted them black. We then secured orange webbing across each one and framed out the shooting windows. They look great, 100% professional. We also added a full-sized door in one of the walls. It adds a tactical aspect and is a ton of fun. The best thing about the door is that it’s framed into a real wall and it’s solid as a rock. It works like a real door. No stupid jive. 100% real deal.

BV: Are the walls stationary?

RAZOR DOBBS: No way. The walls are 100% portable so we can move them around and make limitless shooting situations. I want to be able to completely change the stages up if I want.

BV: What targets did you add?

RAZOR DOBBS: Beyond all the steel targets I already have, I made about 20 target frames that hold USPSA targets plus I have target frames that hold cardboard deer targets. I also have a life-sized Cape buffalo target as well. It’s cool as hell. I like to hunt so the deer and Cape buffalo targets were a no-brainer. It really makes the whole experience a riot. I checked into adding some cool poppers and other steel targets from Action (Targets) but I have not made the jump yet.

BV: What about obstacles?

RAZOR DOBBS: When we expanded the range wider I didn’t cut one tree or bush. I left them there for natural obstacles. It’s real cool. It also adds a bit of reality when I’m practicing hunting situations with my 10mm. It really makes it a different range experience with the natural obstacles. You have to run around trees and shoot between limbs and through small openings in the brush. Totally fun. I’m also going to bring in some barrels and things that we can move around.

BV: Have you had any big shoots there?

RAZOR DOBBS: Not yet. When the range was first operational, finished, Mike McNett from DoubleTap Ammunition came down and we shot it for the first time. It was a so much fun. I had two of my camera guys there with all sorts of gear filming and droning the shoot. I was hauling ass, ripping it up, I was so excited.

BV: Did the stages work as you liked?

RAZOR DOBBS: The stages were great. At first, I was so excited, I wasn’t shooting worth a damn! I was hammering the trigger like crazy. I had to calm down, focus and get on the shots. I was on my dream range! I was high on 10mm auto! After I settled down all was great.

RAZOR DOBBS: He loved it. It was so cool. We would shoot a stage and then say, “You know, we could move those walls here and move that target there and really make it difficult.” We could do whatever we wanted.

BV: What else did you do to the range?

RAZOR DOBBS: Here in Texas it gets hot as hell in the summer so I wanted to make a great rest area. I bought some tables and chairs with some storage and put it all under a canopy. The canopy is only temporary right now. I’m still deciding how I want to make the permanent roof.

BV: Are you satisfied with the range? Any improvements?

RAZOR DOBBS: I’ll always be changing and adding things to the range. I’m already wanting to extend the range down the hill into the thick woods. This would be a real cool handgun hunting or SBR type area. My goal is light the whole range up so we can shoot at night…all night. We have the power there, I just need get someone in who knows how to light it properly.

BV: Now that would be fun.

RAZOR DOBBS: Yes it will. Being on the ranch has it’s advantages and one is being able to rip through 10mm magazines in the midnight hour.